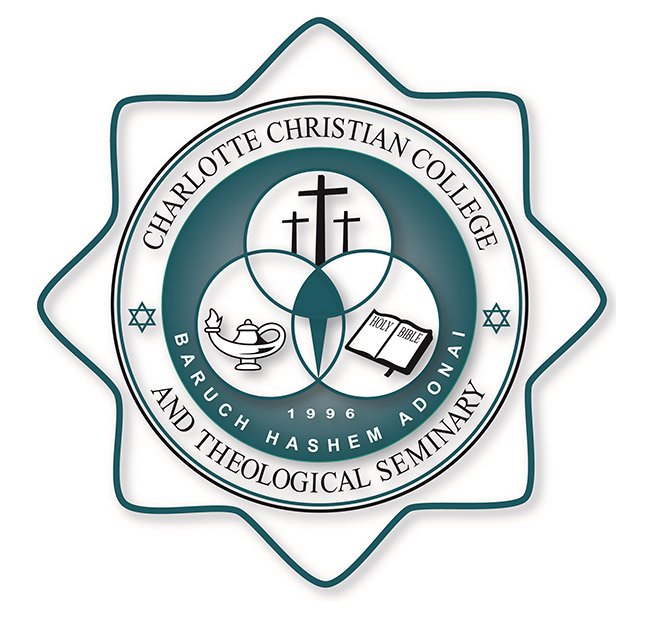 The Official Seal of Charlotte Christian College and Theological Seminary

is considered the most formal symbol of the institution. The Official Seal was established in 1996 and has only undergone minor changes over the years. Its creation and design are intended to reflect the touchstones inherent of the institution.

“Charlotte Christian College and Theological Seminary” is the legal official name of the institution. The name is one that is descriptive of who and what we are as an institution. “Charlotte” identifies the city where the institution is located. “Christian” clarifies the faith we proclaim and the principles we seek to instill in the lives of our students. “College” clearly denotes the undergraduate nature of studies offered. The word “and” denotes that the institution is both a college and a seminary. Charlotte “Theological Seminary” denotes a second school of study that systematically instructs students on the knowledge of God for virtuous Christian living and for the training of those called into ministerial service.

“Charlotte, North Carolina” is the location of the institution. Charlotte, North Carolina is the ideal location for the institution given the local support within the faith community, and the ever-growing city and urban areas. The harvest truly is plenteous and Charlotte Christian College and Theological Seminary is committed to preparing and sending-out laborers (cf. Matt. 9:37).

The Star of David represents our ancestral relationship to Israel and the Jewish faith. It represents the fact that Yahweh God has come in the flesh in the person of Jesus Christ to rule and to reign, and it acknowledges that He is the fulfillment of the Law and promises made to Israel (cf. Matt. 5:17; Luke 4:16-21).

The three overlapping circles are symbolic of the Trinitarian nature of God. Classical Christian orthodoxy maintains that God is three distinct persons: the Father, the Son (Jesus Christ), and the Holy Spirit. These three distinct persons are consubstantial in that they are of one being, substance, or nature. The Trinity is the mystery of mysteries of Christianity and it occupies that category of truths that can only be known, in this life, through divine revelation. The Trinitarian nature of God does not contradict human reason, but rather exceeds it and goes beyond its potential. The institution is committed to teaching, considering, and discovering implications that follow from the doctrine of the Trinity.

Image of the Crosses:

The crosses represent the historical event recorded in the gospel narratives of the crucifixion of Jesus Christ, along with two others (John 19:18). The prominence and centrality of the middle cross — the cross of Jesus Christ — identifies the central pillar and reality of Christianity: Jesus Christ, the Son of God, atoned for the sins of the world by His death on the cross, and that through His death and resurrection provided salvation, by grace through faith, to all those who trust in Him (John 3:16; Eph. 2:8-9; Heb. 1:1-3).

Image of the Holy Bible:

The Bible is the ultimate and divine revelation from God. The institution, in all its facets, gives authoritative primacy to the Bible, and is committed to the words written by the apostle Paul declaring, “All Scripture is given by inspiration of God, and is profitable for doctrine, for reproof, for correction, for instruction in righteousness: That the man of God may be perfect, thoroughly furnished unto all good works” (2 Tim. 3:16-17, KJV).

Image of the Lamp:

The lamp and oil is symbolic of the light and life promised by our Lord Jesus Christ and given through the Holy Spirit. Jesus is not only the light of the world (John 8:12), but so also those who follow Him (Matt. 5:14-16). It is by the eternal Holy Spirit that men shine their light to the world. The institution is committed in deed and in word to be that city on a hill that shines its light out into a dark world.

The ichthys symbol is formed by the overlapping circles. Ichthys, from Koine Greek is the word for fish, and it was this symbol of the fish that was used by the early Christians to identify their Christian belief and loyalty to Christ. The institution, in a similar manner, publically and symbolically identifies itself with Christian belief, and specially, the gospel of Jesus Christ.

Note also the arrow pointing vertically to the Cross of Christ which, again, emphasizes the centrality and supremacy of Jesus Christ.

Baruch Hashem Adonai is the Hebrew transliteration meaning, “Blessed be the name of the Lord.” The commitment and heartbeat of the institution is that all things be done to the glory of God (1 Cor. 10:31). Baruch Hashem Adonai expresses that commitment and is the heart of the institution. Scripture teaches us that it is the name of the Lord that is to be praised, honored, and glorified above all else.